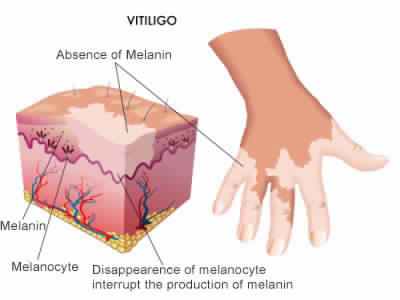 Vitiligo is a pigmentation disorder or a condition in which the skin gets affected and starts losing its natural color. The white patches appear on the skin because of the damaged melanocytes i.e. the cells that are responsible for the pigmentation of skin. These patches appear not only on the skin but on the mucosal membranes and the retina as well. People with dark skin color are more affected with vitiligo in comparison to the light skin colored people.

Nobody exactly knows, why this skin disease actually appears and why the melanocytes becomes self destructive. But because of this, the number of cells in that particular area also drops drastically. The skin does not produce melanin pigment if the melanocyte cells get destroyed. Less of melanin in the skin is responsible for white or grey patches that appear on the skin. Some of the common diseases that are linked with Vitiligo are Pernicious Anemia, Alopecia areata, Diabetes mellitus, Psoriasis, Hyperthyroidism and Inflammatory Bowel disease.

The actual reason behind this uncommon skin disease is still not known to anybody yet. Scientists came up with the theory that vitiligo is caused because of autoimmune attack upon melanocytes.

The cause of vitiligo is not yet known, but on the basis of many researches it is assumed that it may be because of the below reasons:


Progression of Vitiligo can be classified in two ways

Non segmental vitiligo can be categorized into 5 parts
a. Generalized Vitiligo: It is very common and can affect any area of the body
b. Acrofacial Vitiligo: Area near fingers and toes starts changing the color in this type of Vitiligo
c. Mucosal Vitiligo: Dipigmentation appears around the lips and the mucous membrane
d. Universal Vitiligo: This is the rarest of all vitiligo because most of the body is suffering from de-pigmentation
e. Focal Vitiligo: In this type of vitiligo the white patches are found scattered around certain areas. This type of skin disease is found mostly in young children

Melanocyte Transplantation surgery is considered the best for segmental vitiligo. Positive results have been seen in people suffering from progressive and stable vitiligo. Melanocyte skin cells that produce the melanin pigment in the body when gets damaged, white patches appear.

Through this treatment the healthy melanocyte skin cells can be transferred to the affected area. The doctor initially examines the patient and only when they have the confirmation that healing is not a problem and neither finger tips nor lips are involved in Vitiligo (to cure finger tips, lips & nipples there is another treatment available), they start the melanocyte transplantation treatment.

For unstable vitiligo medication as well as special injections are given to the patients to stabilize the condition and after that Melanocyte Transplantation is being carried out.

Melanocyte Transplantation is a surgical method that helps in treatment of Vitiligo or Leucoderma. The human body has melanocyte skin cells that are responsible for producing melanin pigment in the body. When melanocyte skin cells are harmed or destroyed completely, the skin loses its natural color. Vitiligo surgery has raised hopes in people with the introduction of new improved treatment that it has become possible now to transfer the melanocyte of healthy area on the de-pigmented patched skin. This entire vitiligo treatment may be conducted within 1 to 3 hours. As people living in metro cities like Delhi are very much conscious of their looks, the Melanocyte Transplantation Surgery in Delhi is very much in demand but unfortunately the right kind of treatment or the expertise required to carry out the procedure is not easily available in Delhi. Only few cosmetic centers like Care Well Medi Hub are doing Melanocyte Transplantation Surgery in Delhi with the best outcome.

Who can be treated by Melanocyte Transplantation?

Transplantation of melanocyte cells is best described as Leucoderma Treatment or Vitiligo Treatment. Below you can easily find out who all are suitable for undergoing this treatment.


In a single session how much pigmented skin area can be treated?

In a single session of melanocyte transplantation the physician can operate 100cm2 of the pigmented area on the basis of the body part that is involved. In some patients even 250cm2 skin area can be operated. For large area of pigmentation multiple sessions may be needed depending upon the pigmentation size. Every patient may not benefit from the single session of the vitiligo surgery and more than 30% patients need repeated surgery for complete re-pigmentation.

Melanocyte transplantation is the latest and the most advanced method of treating vitiligo or leukoderma. Through this method a large area or damaged melanocyte cells can be treated. The results of this vitiligo treatment are mind blowing in comparison to another method like skin grafting. Through this method areola, knuckles, genitals and all bony surfaces of the body can also be treated that too with excellent results.

Call us to know more about Melanocyte Transplantationfor treatingLeucoderma/ Vitiligo.